As part of release v87 we have continued the disease curation focus trialled in the last release and this time we have focussed on updating the expert-curated mutation data for mesothelioma, a rare and malignant cancer.

Malignant mesothelioma is a rare and aggressive tumour, most commonly occurring in the pleural mesothelial cells, but also arising in the peritoneal or pericardial lining and tunica vaginalis. For this release we have focussed on updating the expert-curated mutation data for mesothelioma, with 30 additional publications included.

The disease is associated with occupational, and occasionally environmental or domestic, exposure to asbestos, and other mineral fibres. Given asbestos exposure is most common in industries with a male work force, malignant pleural mesothelioma (MPM) is, unsurprisingly, seen predominantly in men. Germline BAP1 mutations have been shown to predispose carriers to mesothelioma. There is a long latency period in MPM, with up to 50 years between exposure and tumour development. Patients have a poor prognosis, rarely responding to conventional cytotoxic drugs. Although surgery combined with radio-chemotherapy can be beneficial in patients who present with early-stage disease, most patients are in an advanced stage at diagnosis. A greater understanding of the underlying genetics of MPM and the development of novel targeted therapies are needed to improve the outcome for MPM patients. The disease will remain a global health issue while asbestos continues to be mined and used, especially in developing countries.

A description of the genomic landscape of MPM is discussed below alternatively you can explore the new data directly on the COSMIC website. 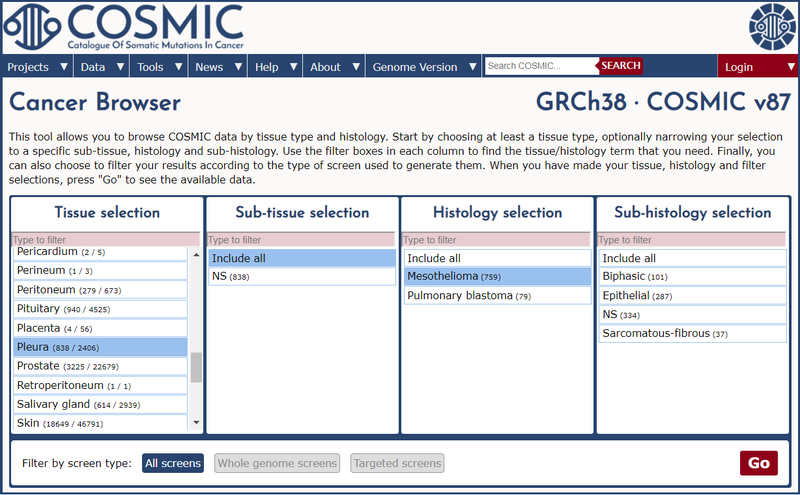 The genomic outlook of MPM includes recurrent somatic mutations in some tumour suppressor genes: CDKN2A, NF2 and BAP1. TP53 mutations are also found, at a lower frequency, as well as hotspot TERT promoter mutations. This mesothelioma update includes a paper by Ugurluer et al. (COSP45544) who perform exome-based next-generation sequencing on pleural and peritoneal mesotheliomas. They find tumour-related mutations in 73% of their mesothelioma patients and confirm BAP1, CDKN2A/B and NF2 as the most frequently mutated genes. In a publication by Kang et al. (COSP45546) SETDB1 is identified as a frequently mutated gene in MPM. Tranchant et al. (COSP45541) find an MPM molecular subgroup characterised by co-occurring mutations in the LATS2 and NF2 genes. Furthermore, by defining the specific deregulated signal pathways they identify PF-04691502, an inhibitor of the mTOR/Pi3K/AKT pathway and already in use in clinical trials for other cancer types, as potentially useful for this MPM subgroup.

Lai et al. (COSP45543) report oncogene targeted deep sequencing of a case of malignant peritoneal mesothelioma, identifying a novel somatic BAP1 insert frameshift mutation and suggesting the resultant tumour-specific neo-antigen as a diagnostic marker. Monch et al. (COSP45532) identify a subset of MPM characterised by over expression of ALK and present preclinical data showing that a combination of crizotinib and rapamycin may be suitable targeted therapy in MPM.

Unlike malignant mesothelioma, well differentiated papillary mesothelioma (WDPM) of the peritoneum shows indolent behaviour and is not associated with asbestos exposure. Stevers et al. (COSP45755) perform genomic profiling on WDPM, finding them defined by mutually exclusive mutations in TRAF7 and CDC42, and lacking the genetic alterations common to malignant mesothelioma.

Want to learn more about how COSMIC can help you?