With more than 17,000 in-person delegates, AACR-22 was a testament to the extraordinary global community and effort to improve outcomes in cancer. It also reflects the scale of the challenge we face. It seems every novel insight is accompanied by a myriad of further questions, avenues, and new fields to explore. Reaching global targets for cancer survival in the wake of COVID-19 is going to require collaboration, innovation, and tenacity like never before. Beyond anything else, the conference inspired a sense of hope and pride to be part of this fantastical effort.

At any one time, 20+ parallel sessions were taking place, so it was impossible to catch everything, but we’ve summarised our learnings about exciting emerging topics in cancer research into five-key takeaways. 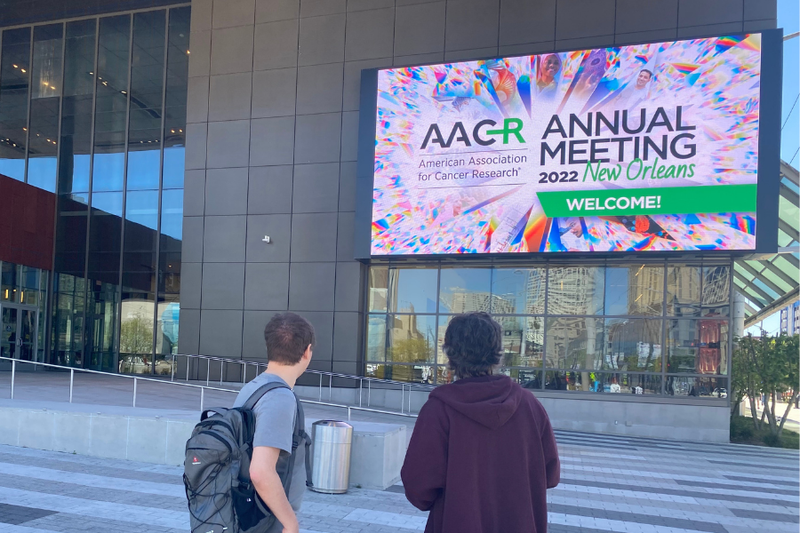 1 - Stopping cancer before it gets started

There is a long multistep process involved in tumour development, and stalling or stopping the initiating changes is an important step in cancer prevention.

Before oncogenic transformation starts, molecular changes can be observed in the cells that will become the tumour and the cells/molecules that create the tumour microenvironment - including immune cells and the extracellular matrix. Next, there is a clonal expansion of cells with tumour-enabling alterations resulting in local conditions for the actual transformation with a ‘classic’ tumour phenotype.

In nature, most cells with these pre-cancerous alterations are dealt with by the body’s natural defensive mechanisms. Cells are either put in a dormant state, eliminated from the cell population by apoptotic programs, or identified and destroyed by the immune cells. The new paradigm is to support this natural elimination process and assure 100% efficient removal of altered cells from the tissue before the clonal expansion phase starts.

It’s not quite that simple though. Most early changes happen in tissues that are phenotypically and functionally normal which raises the question(s) – how can we detect pre-cancerous states and prevent their further transformation? What are the enabling features of precancerous tissue that allow further transformation? Which of these enabling features could be successfully targeted?

The challenge faced by the research community is to identify the right combinations of these molecular changes that can be used to detect, identify, and selectively target clinically-significant pre-cancerous cells

Immunotherapies have been having huge success, but there are increasing challenges around how to increase the efficacy of these therapies. The result is a spotlight pinpointing the dynamic interactions between different subpopulations of cells within the tumour microenvironment.

The events during tumourigenesis are seen as an evolutionary process. The strong selective pressure is created by intracellular changes and a dynamically changing (micro)environment. Combined, these influence the occurrence of new mutations and the dysregulation of cellular physiology.

Fortunately, we have ways of studying this complex evolution. Popularisation of WGS and other OMICS methods, and growing availability of such data, means we can observe a more systemic approach to describing oncogenesis. In addition to genes and pathways, there is more focus on temporal and spatial interactions between networks of genes and cell populations, which allows for building more detailed, more complex, and broader models of oncogenesis.

2- Underrepresented populations are a priority

An important and fundamental message we took home from the conference was related to the democratisation of data. Several studies highlighted the overwhelming skew of available genomic datasets towards those of European descent. While still in its infancy, this inequality is being addressed by growing number of studies focused on underrepresented populations.

It is recognised that different populations might have different cancer incidence and mortality rates, but also sensitivity to therapies, or drug toxicity. This progress is taking us closer to answering the question of how genomic ancestry profiles can help to better personalise diagnostics and therapy.

However, ancestry can’t be studied in isolation. There’s an increased focus on the biopsychosocial model of disease in the context of underrepresented populations.

Occurrence of certain tumour types, their aetiology, and optimal therapeutic approaches are specific for certain ethnic groups. This is likely caused by a combination of germline genetics, behavioural patterns, environmental exposures, and other factors like access to diagnostic and medical services.

In addition to “classic” molecular or biochemical biomarkers, a new class is arising. Signatures detected in genomic, transcriptomic, proteomic, and metabolomic data are used to stratify patients for therapies/clinical trials or associated with prognosis. These new biomarkers include immune cell profiles of tumour and extra-tumour tissue, analysis of patient serum for exosomes (proteins, mRNA, lncRNA), secreted proteins, ctDNA/type of fragmentation, nuclear transport proteins, or specific glycoproteins.

Which brings us to another key trend within this context – the importance of CNVs!

CNV profiles and signatures are often as good in clinical predictions as simple somatic mutations, but their detection requires much shallower sequencing. This shallower sequencing is much cheaper and more efficient. It enables more patients to be diagnosed with the same infrastructure as single cell, longitudinal approaches are more likely to be applied in clinics. This is important in the context of underrepresented populations – if we are to tackle the challenges socioeconomic status presents then we need scalable, low cost solutions for all patients.

4 - Picking the right combination of tools for the job

Finally, we learned that every therapy re-wires the tumour cell and surrounding environment. There are two key elements being explored currently:

Firstly, there’s a growing number of cases where a precise therapeutic attack on certain pathways sensitizes cells to known drugs – providing new avenues for therapeutic strategies. Secondly, the immune system also changes in response to therapy, which is being used to identify clinically significant events such as recurrence and metastasis.

In combination, the cancer cell and immune system determines the success of some therapies. So both can be modified to prime the tumour for the effective response to therapy.

Of note, it’s becoming clear that the molecular profiles of tumours do not totally overlap with their histopathological classifications. But the former are better in predicting therapy response. Certain types and subtypes of multiple cancers can be pooled together into larger cohorts with common drug sensitivity or prognosis. More than ever we must look across multiple cancer types. Next-gen biomarkers can be used to define these groupings of cancers.

So how to apply this knowledge to address intra-tumour heterogeneiy? The solution could be in applying polytherapies. Different drivers in multiple (or all) existing subclones can be targeted in single treatment and the dosage adjusted to prevent new subclones from dominating the cell population or tumour from developing drug resistance. In short: the future is predicting and preventing drug resistance instead of reacting to it.

A long way to go

Our short summary of five trends doesn’t even scratch the surface of the breadth and depth of research presented at AACR-22. Despite extraordinary progress, there’s still a long way to go until the day when cancers can be effectively prevented, treated, or managed as long-term chronic illnesses.

What clearly came across at the conference though, was that we are not tackling this alone. In fact, we need a global collaborative effort if we are to make progress. We’re excited for the coming years of collaboration, innovation, and breakthroughs, and have already started counting down the days to next year’s conference – hope to see you there!