In October, people around the world showed their support for everyone affected by breast cancer as part of Breast Cancer Awareness Month. Meanwhile, behind the scenes, COSMIC's expert curators were working hard to collate information relating to rare breast cancers (and other rare female cancers) ready for our upcoming release later this month.

The news is fairly optimistic, breast cancer mortality in high-income countries has dropped 40% between the 1980s and 2020 - and it’s continuing to drop by around 2-4% in these countries each year. Innovations in treatment and targeted drug therapies, such as trastuzumab to treat HER-2 positive cancers, are showing outstanding results. And let’s be clear, early detection and effective treatment is really the only option. Unlike many common cancers, even if all the risk factors for breast cancer development were controlled, this would only reduce the risk by 30%.

There’s still a long way to go for the 685,000 people who don’t survive each year. We need to take a multi-pronged approach - we have to optimise care pathways, facilitate early diagnosis, and provide the right treatment at the right time.

And for treatment-resistant breast cancers? We need to understand what’s driving these cancers at a genetic level and identify targets for the next generation of drugs.

Cue COSMIC as the navigational tool that hosts the data to springboard scientific innovation. Our next release will have a special focus on rare female cancers, including the rarer breast cancer subtype with notorious poor outcomes, metaplastic breast cancer (MpBC). Ahead of release, see a sneak peek of some of the publications curated for the V95 dataset below.

The lowdown on metaplastic breast cancer

Metaplastic breast cancer is a rare and aggressive malignancy. Although the incidence is low (it only accounts for 0.2–5% of all breast cancers), MpBC accounts for a significant proportion of breast-cancer deaths.

MpBCs are usually (but not always) triple-negative - meaning they lack expression of oestrogen receptor (ER), progesterone receptor (PR), and HER2. So some of the revolutions in current treatments are ineffective. Similarly to other triple-negative breast cancers, they’re more likely to present with distant metastasis, but they generally have a worse prognosis than their grade-matched counterparts.

Compared to other cancers, relatively little is known about MpBC, but more studies are happening all the time. Speaking of, time to look at some of the new datasets being incorporated into V95 of COSMIC.

Classification: Phenotypic and molecular dissection of metaplastic breast cancer and the prognostic implications

When cancer is rare, it can be harder to create clear definitions, classifications, and guidance. This is especially true of MpBC, a cancer literally named for its heterogeneity in cell types. Metaplasia derives from Ancient Greek and means ‘change in form’. In this context, it’s the transformation of one differentiated cell type to another differentiated cell type. The World Health Organisation (WHO) guidelines currently rely on the structure, shape, and organisation of the cells to create sub-categories - without any information on molecular causes or clinical guidance. 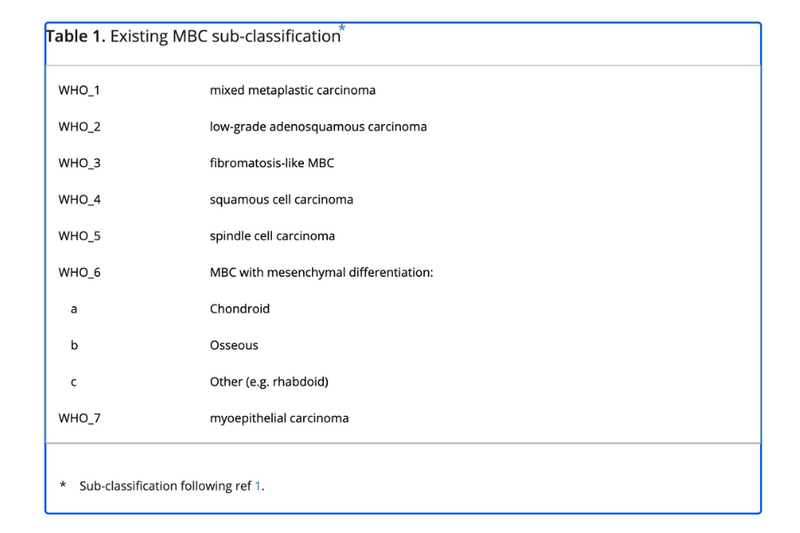 But Lakhani et al. decided to look under the hood. Using strength in numbers, they formed the Asia-Pacific MpBC consortium to collect and study 347 MpBCs in depth.

What did the increased numbers provide? Let’s start with genetics. Exome sequencing was performed on 30 of the MpBC cases and found TP53, PTEN, and PIK3CA mutations co-occurring. This countered a long held concept that TP53/PTEN and PI3CA/PTEN mutations were mutually exclusive.

Moving on to prognosis - the top question that patients have when diagnosed: ‘How bad is it’?’ This study shed a little light. The significant indicators of poor prognosis were large tumour size, loss of cytokeratin expression, EGFR overexpression, and the presence of more than three distinct morphological entities. On the flip side, favourable indicators included fewer morphological components and EGFR negativity.

With these findings, Lakhani et al. suggest minor changes to the WHO classification. The paper ends with the comment that, ‘thousands of samples would need to be reviewed centrally in order to tease out the subtleties required to make any bolder changes to the guidelines’. As more similar data is incorporated into COSMIC datasets, it will enable this scale of analysis.

Having discussed the WHO guidelines more broadly, time to zone in on one of the even rarer subtypes of MbBC, WHO_5: Spindle Cell Carcinoma. This subtype displays the previously mentioned triple-negative characteristic, as well as having an association with resistance to conventional chemotherapy.

Evidently, new tactics are needed. Precision oncology and immuno-oncology could provide some strategies for targeted therapies, but first we need to know if the right mutations and immune markers are present. Gatalica et al. studied this with some promising results.

They used 23 MpBC spindle cell carcinomas and thoroughly analysed them using immunohistochemistry and DNA/RNA sequencing. And some familiar faces emerge here - PIK3CA, TP53, HRAS, NF1, and PTEN pathogenic gene mutations were identified in the majority (21) of cases. As highlighted by the authors, PIK3CA mutations are particularly relevant because the’ve been classified as strong predictors of response to PIK3CA inhibitors, and several drugs have either been recently approved, or are in the pipeline, for targeting the PI3K pathway, including Piqray (alpelisib).

Finally, onto the immuno-oncology markers. PD1 is a molecular ‘gun’ found on the surface of immune cells - when they spot a threat they attach and fire. Unless the cell in question puts out a defence - PD-L1 - which in essence puts the safety on and prevents firing. Tumours can use PD-L1 as a means of escaping destruction by the immune system, so new drugs have been developed to block PDL1 and PD1 from binding. But there’s an added layer of complexity, if another molecule - PTEN - is present, then it’s indicated that drugs designed to target PD-L1/PD1 will be less effective. 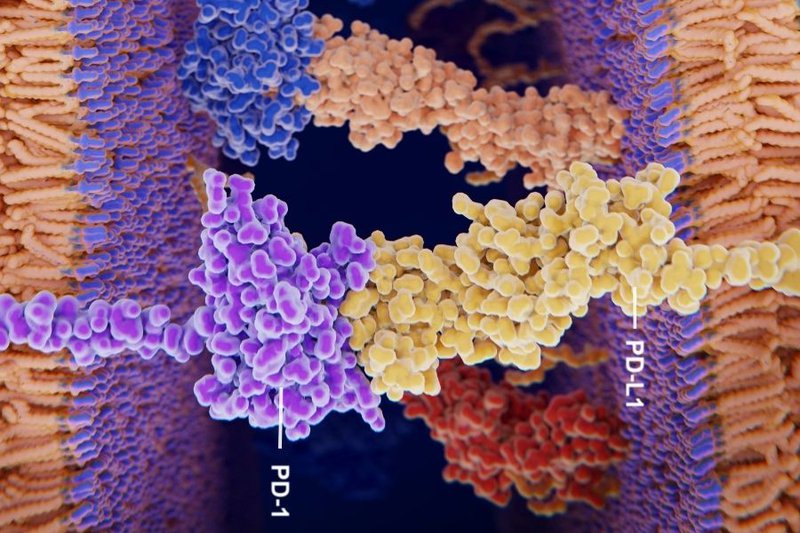 Back to the research. The study found evidence of PD-L1 expression, but only above the threshold for treatments in two cases. And two cases also had concurrent PTEN expression. So for biomarkers, there’s promise that targeted therapies could work in some cases, but a thorough analysis would need to be done on a case by case basis.

For the final study, we continue on with the theme of the immune system. More specifically, unpicking how immune profiling and mutation profiling could provide insight on survival.

In an interesting addition to the previous study, Yuan Yuan et al. also speak about the PI3K pathway. It would appear PIK3CA mutation is associated with poor overall survival and increased likelihood of relapse. That being said, they specifically highlighted a specific case study of a patient with an exceptional response to a PI3K-mTOR targeted therapy.

Quick interjection for those who aren’t familiar - the PI3K pathway involved in cell growth, proliferation, differentiation, motility and survival. Basically, when active it’s shouting: ‘GO FASTER, LIVE LONGER, REPRODUCE!’. It’s normally tightly regulated, but if mutated, it leads to a cellular rampage - hence why treatments to block this could be very exciting.

Now onto the immuno-oncology. You’ll remember PD-L1 from the last study. Well in this one, nearly half of the MpBCs had >1% of PD-L1 expression (the threshold for treatment with immune-checkpoint inhibitors). Similarly to PIK3CA mutation, PD-L1 expression was affiliated with poorer survival.

So in combination, these three latest integrations into COSMIC datasets are building the start of a very strong case for PI3K-targeted therapy in treating MpB, and also the promise of immuno-oncology data as biomarkers for prognosis and treatment options.

It’s promising to see so many new studies and big data being gathered for the rarer cancers. And it’s evident that the route forward is in numbers, collaborations, and collating evidence from multiple sources. Seeing the building evidence for PIK3CA expression involvement in MpBC is just one example of this. But without a centralised database, curated from thousands of papers that have been read and analysed by trusted experts (with a passion for their work) it would be easy to miss key cases.

That’s why we’re excited about the next launch. COSMIC V95 will have a specific focus on rare female cancers and will be launched November 2021 - watch this space!

To hear about latest launches and information about COSMIC, remember to opt-in to marketing communications on your account. Alternatively you can follow us on LinkedIn or Twitter.