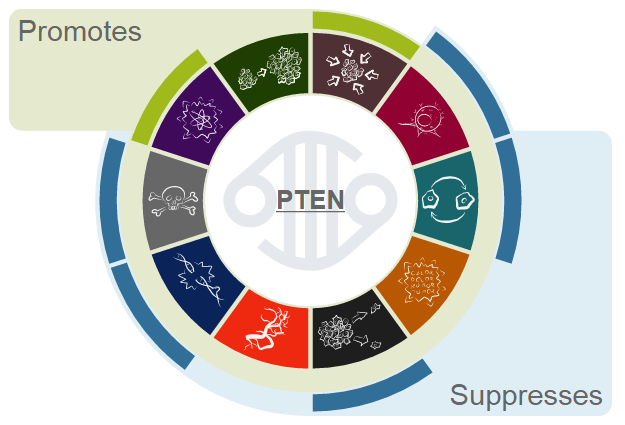 Edited 3rd August, with the COSMIC v82 release the beta site is now the current site, so links have been updated to reflect this change.

Based on the defining work by D. Hanahan and R. A. Weinberg published in Cell, COSMIC, in collaboration with Open Targets has integrated these key hallmarks into the Cancer Gene Census. Utilising careful manual curation, 116 census genes have so far been characterised functionally based upon published scientific evidence.

The Hallmarks of Cancer feature sits alongside the gene view in the Cancer Gene Census, it visually explains the role of the gene in cancer by highlighting which of the classic behaviours are displayed by the gene and whether they are promoted or suppressed. A concise overview with associated references is then displayed in a panel down the right hand side, references can be acessed directly for first hand verification and further investigation.

Below is a screenshot of the one of the new pages in COSMIC - here the central figure illustrates which behaviours are promoted in the PTEN gene and which are suppressed. This figure is used throughout the hallmarks pages so with a quick glance researchers can determine which behaviours a specific gene exhibits. Hovering your mouse over a specific tab within the figure – for example the black 'invasion and metastasis' tab – will bring up its label within the central box and highlight where on the right hand side more information can be obtained. 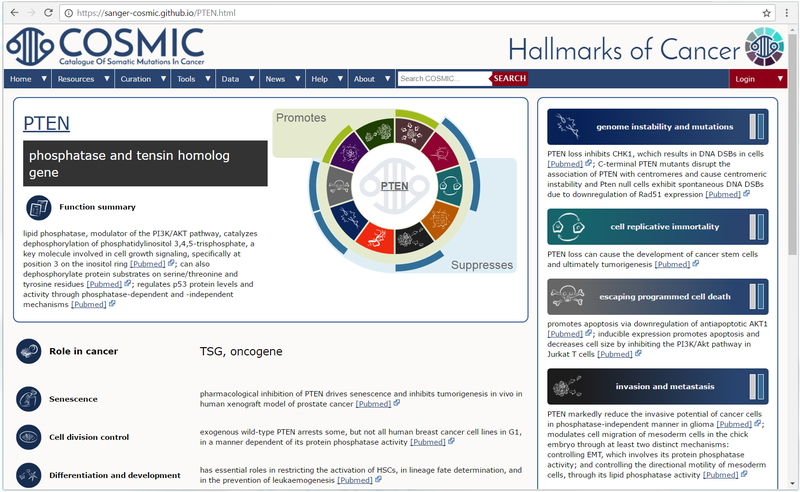 If you prefer you can also view this information summarised in table form by using the 'switch view' toggle button. The table view, below, contains the same information but gives a written description of each behaviour rather than a symbolic illustration.

A functional summary of the gene is given on the left inside the box with appropriate references. The role of the gene in cancer is clearly displayed below- here PTEN is defined as both a tumour suppressor gene and an oncogene.

A total of 20 categories are considered when describing each cancer gene, they are shown in the figure below. However, only the categories that are specifically relevant to the individual gene and are supported by published scientific literature are displayed on each of the gene pages. 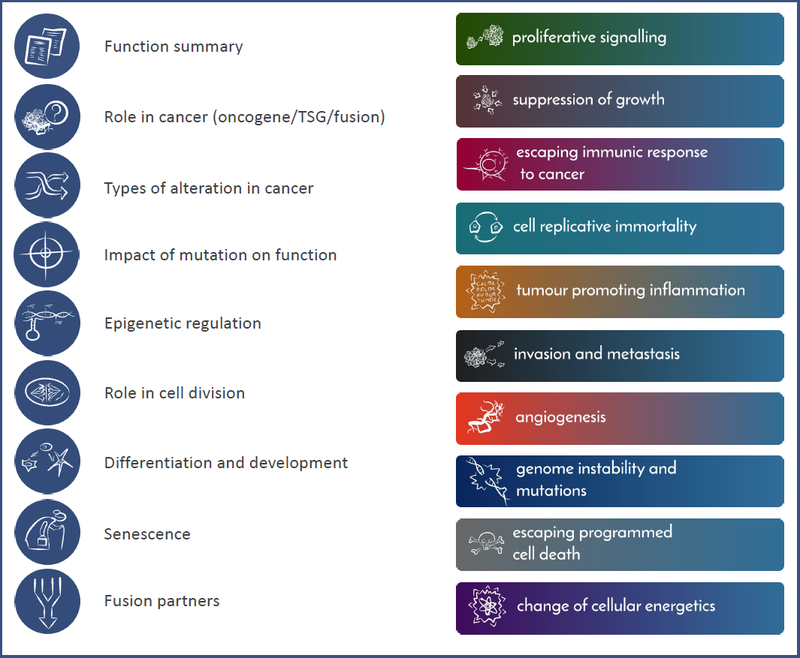 Tools such as the Hallmarks of Cancer, layer evidence-based interpretation over the raw data stored in COSMIC. We see the development of tools like this as being central for COSMIC’s evolution from a simple repository of mutation data to a central resource of cancer information. The new Hallmarks feature can be accessed from within the gene pages or from the Cancer Gene Census pages. We welcome your thoughts and feedback on this new tool, please send all comments to cosmic@sanger.ac.uk.